As I mentioned earlier, we decided to take a trip to visit New York City to see friends and our favorite New York places. As the time to travel neared, I began to get a little more anxious about this “taking a 7 month old on his first plane ride”. Well, as Maggie points out, Brenden was great during the trip. Which was amazing considering some of our travel woes.

It started with our departing flight. We got rushed into boarding the plane and after finally getting arranged in our seats, on a plane with malfunctioning air conditioning, the following announcement is made:

Ladies and Gentlemen, I have good news and bad news. The good news is your flight isn’t cancelled. The bad news is that the flight that the pilots for this flight was just diverted to Alliance airport. It will be at least an hour before they will be here and ready to take off.

We are offered to de-board the plane if we want, but if we do, we need to take anything we brought on board. Since we were loaded down with a lot of baby stuff and our backpacks, we decided to wait it out on the plane. Well, 45 minutes later, we’re told that they still haven’t taken off to come to DFW and that it would be at least another hour before they got there. At that point, they recommended that everyone get off the plane. We decided at this point, that was probably the best idea.

Once we finally got on the plane, with a flight crew, Brenden actually fell asleep before take off. So I held him for the first 2 hours or so of the flight asleep on my arm. It made getting a drink and other things an adventure. Once he did wake up, he was in a good mood and made faces with the people sitting around us. Little did we know, we’d need every last ounce of his good mood before we got off that plane.

We land just fine at Newark and start to taxi to the gates. I noticed we stopped quite short of them and then we get the following notice from the flight deck:

I’m sorry to add insult to injury folks, but we were scheduled to park at Gate 34, and unfortunately Gate 34 is currently broken. The ground crew is working on it, but in the mean time, we’re waiting for one of the planes at gates 32 or 33 to pull back and we’ll park there. Sorry for the additional delay.

So we finally get out of the plane at 3:30 PM EST when we were scheduled to arrive at 1:00 PM EST. Gotta love the airline industry.

We had plans to meet with the people I used to work with at 5 PM. Needless to say, we were a bit late for that after getting a taxi and checking into the hotel and getting into the City. But we did make it and had a very good time seeing those folks and them meeting Brenden. Afterwards, we called up some more former co-workers, who had also moved on, and met them at Ruby Foo’s in Times Square. After some delicious Pan Asian food, Maggie, Brenden and I headed back to the hotel to crash as we were all very tired from a long day of travel.

The next day, we made a plan to meet up for lunch with my childhood friend John and his family. They have a new daughter that we hadn’t seen and of course they hadn’t seen Brenden either. They have the cutest little girl and their older boy had definitely grown and was a lot more talkative than I remembered when we lived there.

After lunch, Maggie wanted to go to Century 21 before our dinner plans with some of our dog walking friends (Mark and Valerie, and Suzanne). We went there and braved the crowds, which by the way, were huge as it always gets just before Christmas in NYC. Before coming back to New Jersey, we stopped and looked at the new photos they had put at the World Trade Center site. No matter how many times I see it, when I start to think about it, the events of that day still bring tears to my eyes.

Once back in Jersey, we grabbed a bottle of wine and met our friends at this great Italian cafe that was in our old neighborhood. It was quite an evening as there were two huge parties there making a lot of noise. And this wasn’t the largest of places. The food was amazing as was the conversations. Mark and Valerie were also gracious enough to offer to baby sit Brenden on Sunday, more on that later. They all walked us back to our hotel and we settled down for another good night’s sleep.

Sunday morning, we took the whole family to Central Park. The one big thing we wanted to do while there was to get hot chocolate at this place we had always gotten it while we were living there. Sadly, we found that it was closed at least for the day. We’re hoping not forever.

After that, we made our way back to New Jersey to drop Brenden off at Mark and Valerie’s and made our way back into the City. We ate at our favorite place in Chinatown where we got their amazing steamed pork buns. After that, we headed off to see the New Jersey Devils play the New York Rangers at Madison Square Garden. I was in hockey heaven as it was a hockey game at MSG and also one of the biggest rivalries currently in the NHL. ( My wife is the best for letting us choose hockey over broadway ) New Jersey ended up embarrassing the Rangers 6-1 and the crowd got “rowdy”, with a fight breaking out two sections over.

We went back to Jersey to pick up Brenden from Mark and Valerie. They had a good time watching him and came to the conclusion that they weren’t ready for the work it takes to have a baby. Not that Brenden was bad or anything, just that they didn’t realize the amount of energy needed.

For Monday, we planned a lot of stops. First we hit FAO Schwartz, then the new 5th Ave Apple Store, Rockefeller Center to see the tree, then M&M World, then we had my favorite meal in the whole city: Street Meat. Yummy! Then we went to see the Macy’s windows and finally headed back to the hotel after a very long day.

On our final day, we went to go see Maggie’s former co-workers at a place in New Jersey. They were very excited to see Maggie and Brenden. After hanging out there, we left for the airport, where we had another fun adventure flying home. Luckily, we were only delayed an hour this time.

Overall it was a great trip. It was really good to see everyone and for us to be able to have a good time bringing the little one along. He won’t remember it, but we have plenty of pictures to prove he was there: 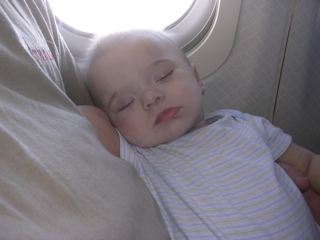 Brenden asleep on the plane 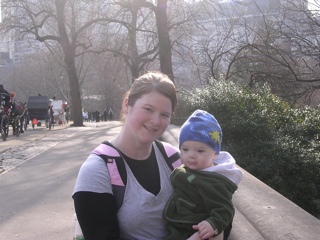 Brenden and Maggie in Central Park

Brenden and I in Central Park 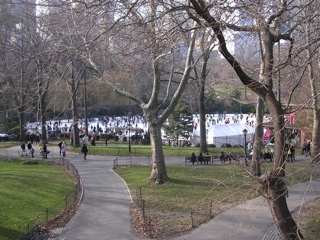 The skating rink from Serendipity 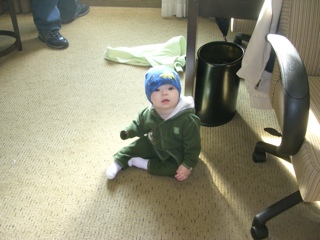 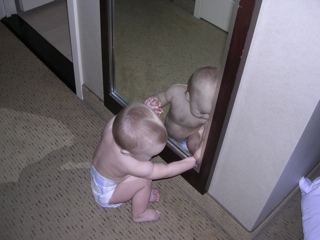 Brenden really, really, liked this mirror in our hotel room 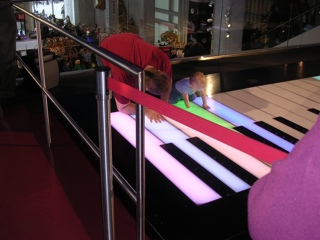 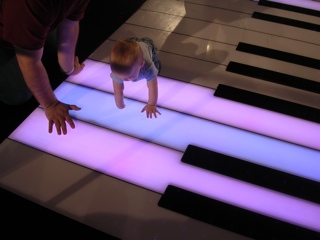 Brenden plays on the piano at FAO, the one in the movie Big 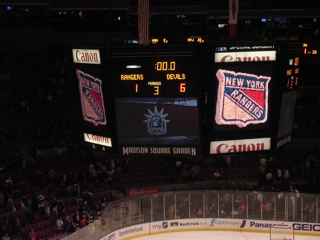 Final score of the hockey game 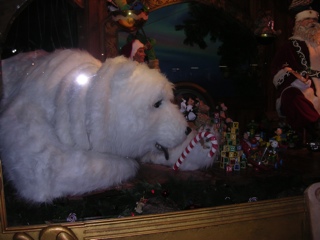 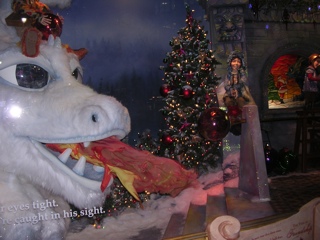 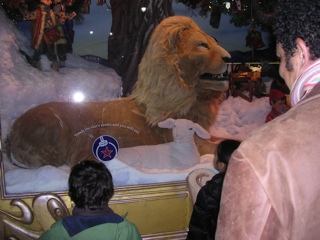 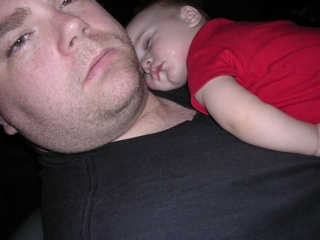 Finally, Brenden and I spend a little recoup time waiting for the plane ride home

Well, the good news is that you may not post for a month at a time, but when you do, you make it a long one!