Man, some things should just not be claimed. I bought a “windproof, lifetime guarantee” London Fog umbrella a couple of months ago. It’s really taking some beatings here, mostly while walking along the Hudson on the way to work or on the way home. The wind along that stretch could probably give the wind in West Texas a run for its money. There are times where I can’t actually take steps forward or I am just being blown down the street.

So when I saw this umbrella, I thought I would buy it and give it the ultimate test. It had been passing pretty well, that is, until Wednesday. A little storm whipped up and was blowing wind and sleet fairly hard. Certainly some of the hardest wind I’d been in yet. The umbrella was holding it’s own, until I got the corner to turn home, and then, snap, the wind caught it and almost pulled it out of my hands. But at the same time it snapped three of the shafts that hold the fabric up. I was in shock. Also at this point, I was being pelted by sleet being driven by a mighty powerful wind. Thankfully it was to my back, but it still hurt a bit.

It was very comical when I came walking in the door with my busted umbrella and proclaimed “Windproof my ass!”. Although Maggie did laugh, she had her own experience in the sleet.

Anyway, I’m going to try and make a claim on the lifetime warranty tomorrow. I just thought I would post this pic. I’ll post here when I find the outcome of the warranty. 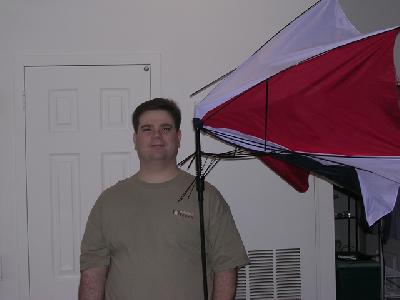