For those of you that don’t know me, I’m a huge fan of hockey! Which is really strange since I grew up in North Texas. But I’ve been a fan since I saw my first game on ESPN back in 1989. And once Dallas got a team and I was able to go to games, I was hooked even more.

Once we got there and got in, I was in awe. There was memorabilia everywhere. It would take a lifetime to see it all. I was drawn to the sound of pucks hitting boards and found two games they had setup. The first was one where there were targets projected on a screen and you had to try and hit them with the puck. I did pretty well at that one, hitting 2 out of 5 targets. (Heck, I was happy I could lift the puck)

The other game I was not very good at all. It was a simulation where you played a goalie, putting on the blocker and the glove and grabbing a stick. Then you faced this wall where simulated shots came out of holes. The simuation was of Gretzky and Messier shooting at you. The only shot I saved was the one that hit the post. But I guess, technically, the goalie isn’t responsible for the post. 🙂

After doing that, Maggie and I moved upstairs to where they had a “production truck” setup so fans could see how a hockey broadcast is put together. That was really neat. Via the power of computers, I was able to be the director calling the shots of which camera feed to use. Then I was the sound engineer changing various levels of sound during (like ice level, crowd, announcers, etc). Finally, I was responsible for putting together a replay package. It was really fun.

In the same area, you can also test your announcer abilities. Well, since Maggie laughed at mine, I’m guessing I shouldn’t go for a career in broadcasting.

Finally, we made it to the most important room at the Hockey Hall Of Fame: Where they keep the Stanley Cup and all the other trophies. I got pictures of all the trophies and then got pictures of the cup up close showing the year the Stars won it. I also got a picture of me with it, as you can see: 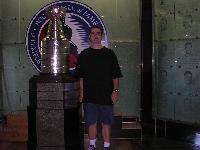 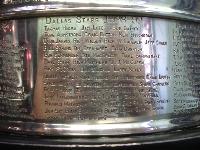 For any hockey fans out there, you must make a pilgrimage to the Hockey Hall of Fame, it is a sight behold.

2 Responses to Hockey Hall of Fame