For the long holiday weekend, Maggie and I decided it was high time to go check out our neighbor to the North, Canada and went to Niagara Falls. What a great choice that was.

Niagara Falls is about a 7 hour drive from where we live in New Jersey through parts of Pennsylvania and Upstate New York. We drove across the top of the Finger Lakes region. We made a stop in Buffalo on the way there which I will be writing about later (hint: It has something to do with Buffalo Wings)

After that small detour we made our way to the border. Now, I must admit that this would be my first time to leave the United States which I know is pretty lame. But I was a little nervous crossing the boarder, which seems silly especially with it being Canada. I had our Passports ready to go, and was shocked that the guy didn’t even look at Maggie’s. He just asked what our nationality was, what was the purpose of our visit and how long we would be staying. Then let us on our way. I was floored.

So we get to our hotel and check-in. We had originally booked a City View room, meaning we would be facing away from the falls. I asked the clerk if they possibly had any Falls View rooms left. She checked and only had a “River View” left. I said we’d take it and up to our room we went. We actually ended up with a partial view of the falls as you can see here 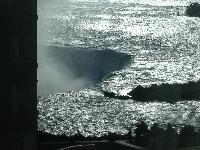 For Saturday morning we had made reservations to ride the Wet Jet Boat from Whirlpool Jet Tours. This ride is an open jet boat that takes you through a class 5 rapid (on a scale of 1 to 6) a few times getting you very, very wet. They also pull up beside a class 6 rapid to show it to us, but can’t go into it because it’s entirely unsafe. These rapids are downriver from the Falls, but are caused because of the thousands of years of erosion by the falls that carved the gorge the river is going through. As it was explained to us, the rapids are compression waves which aren’t caused by rocks, but by the amount of water being pushed through the gap causing a lot of pressure. I’ll be posting a picture later that they took of us plunging into the rapid.

On the way to the Jet Boat place, we took a nice little ride through the Canadian wine country. So many vineyards…so little time. Here’s a picutre we took of the Niaraga River on it’s way into Lake Ontario

That afternoon we drove up to Toronto, which I will be posting about later (hint: I got to see something I really, really cherish there)

That night we had dinner at a nice German restaurant and then tried to get some cash out of the ATM to go the casino next to our hotel. Needless to say, I know where ever ATM is in Nagara Falls now and well, lots of them were having problems connecting with our bank. So we finally gave up and went up to our room and crashed.

The next morning we went for some Tim Horton’s because, well, when you’re in Canada, going to Tim Horton’s for a doughnut is a requirement. After the Tim Horton’s, we tried an ATM at a 7-11 and low and behold, we were able to get Canadian cash out….Casino here we come!

After an hour of gambling where I did fairly well at a blackjack table, Maggie and I made our way to the Maid of the Mist tour. This is the boat Jim Carrey’s character in Bruce Almighty goes on for his “live shot” at the beginning of the movie where they announce the other reporter has gotten the anchor position. Anyway, they take you right up to the falls with the mist blowing on you and you can feel the power of the falls, it was amazing.

After that, we walked back down the river and Maggie grabbed these two shots of the falls, the first is one of the Horseshoe Falls (also known as the Canadian Falls) where you can see a Maid of the Mist boat in the middle of the poole. The other shot is of the American Falls. The rainbows caused by the mist are beautiful. 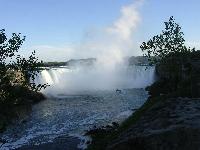 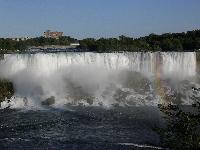 Finally, we went to the Hard Rock Cafe so I could get a shot-glass and then we made a stop at the other casino and had another hour or so gambling away. I had another decent run on the blackjack table.

And then we hit the road and got quite the hassle from the US Customs Agent coming back into the country. Kept asking us questions and basically made me feel like he doubted we were legit. But he finally let us pass and we were back in the country.

One Response to Niagara Falls