This is a post a long time coming, like over a year ago long. For those that know me, they know I’m a huge Stephen King fan. ( I know, cue the crazy lady from Misery

) I’ve read just about every word the man has published. And that’s a lot of words.

Sometime in August of 2005, Maggie and I were checking out books at the Barnes and Noble in Union Square. She sees a poster/catalog like thing for “The New Yorker Festival“. We take it home and start flipping through it and then I notice “Oh my God! Stephen King is going to be doing things at this thing!”

So here’s my chance to get to see my favorite author do a reading and participate in a panel discussion. I jump online to get tickets. Much to my dismay, I can only get tickets to the panel discussion. I buy them and then start trying to figure out how I’m going to get into the other event, which is a reading with another author, Michael Chabon ( He wrote “Wonder Boys

I start keeping my eye on Craigslist. And I get lucky, a pair of tickets comes available for face price. I’m all set. Maggie agrees to come along even though she’s had a rough day at work and I’m probably annoying her more because I’m giddy with excitement. We get to the reading and find out seats, which are at the end of the row.

While we are waiting for the event to begin, Stephen King comes walking in and stops at the end of our row to talk to someone in the aisle. He’s within reaching distance. But I stay my hand and just sit back and take in that I’m a couple of feet away from him.

Mr. Chabon goes first and reads the first chapter of his soon to be published book, “The Yiddish Policemen’s Union: A Novel

“. It was quite entertaining and I’ve been looking forward to the release of that book. It was supposed to be last April, but it got pushed back a year.

Mr. King comes on stage and reads a chapter much deeper into a novel he’s just completed the rough draft of called “Lisey’s Story

“, which you may notice is the book I’m currently reading. The chapter was very good and spooky, making me really want to read that book as well. And to think I wouldn’t be able to read it until this fall.

After they were both finished, a short Q&A session was conducted and I stood up and asked them who were their major influences. Funny thing, Mr. Chabon immediately said “Stephen King”.

The next day was the morning panel which included several authors who created their own worlds for their books to take place in. This was a very good panel hosted by the Fiction Editor for The New Yorker. I think the most amazing thing I learned during this was that shortly after 9/11/2001, Stephen King wrote a short story about a guy who played hooky that day from his office at the World Trade Center and afterwards the things of people he worked with started showing up in his apartment. I thought it was a brilliant story idea but amazingly, he was turned down by The New Yorker. It floored me that a writer as established as Mr. King could still get rejected.

, but the time they had scheduled to hand out the wristbands for that free event was the same time as the panel. I was bummed, but I did get to see my favorite author twice! Here’s a very shaky shot I got during the panel. I was taking this shot incognito: 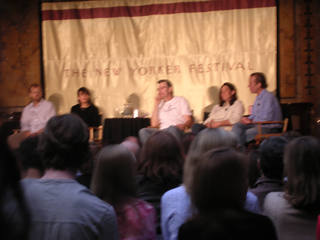 His T-Shirt says “I Make Stuff Up”.

One final note as a “full disclosure”: All the book links in this post and on the right hand side where I have current and previous read include my Amazon Associate ID, which means if you buy the book using those links, I get a small cut.